The funding will support Foundations First, a partnership between Shelter Scotland and Renfrewshire Council. Foundations First is a local charity assisting in breaking the cycle of homelessness and chronic poverty for marginalised families in Renfrewshire by helping them access and keep a home.

The lack of a stable home and periods of homelessness hinder parents’ and children’s ability to build relationships with schools, health services and employment opportunities. This then contributes to the ‘attainment gap’ currently challenging parts of Renfrewshire. Foundations First aims to reduce the level of repeat homelessness in families who have been provided with settled accommodation in Renfrewshire by supporting them in their tenancy.

Graeme Brown, Director of Shelter Scotland said: “Thanks to the support of the STV Children’s Appeal, Foundations First has got off to a fantastic start in its first year. Our staff and volunteers have become part of the community and are working with local people to help children thrive in stressful circumstances. Together they are finding practical solutions that bring hope of a much better future for the next generation.” 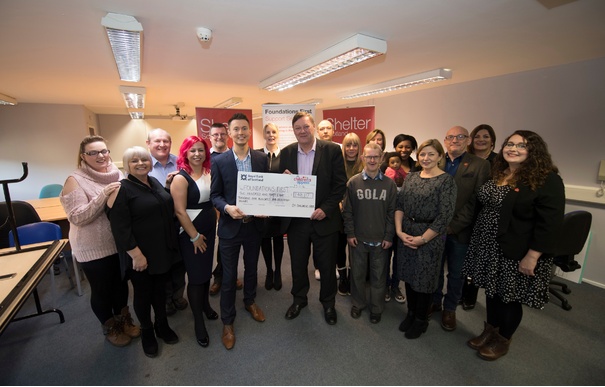 Since launching in 2011, the STV Children's Appeal has raised over £13.7 million, with 722 big and small grants distributed to projects across all 32 local authority areas in Scotland, providing much needed support to over 62,000 children. The money raised is distributed to provide practical help like food and warm clothes; create opportunities for training and employability; and enable social and emotional support for those who need it most.

Sean Batty, popular STV weatherman said: “I am very happy to present the Foundations First project with funding from the STV Children’s Appeal to help children and their families in Renfrewshire create a more positive future. This year I ran, walked and cycled to raise money for the STV Children’s Appeal which was really tough going at times. This is the part I love; it makes it all worthwhile seeing the money head out all over Scotland to help our young people. It was lovely to meet everyone from Foundations First, including some of the service users. I particularly enjoyed handing this big cheque over, as it was to a charity based in my hometown.”

Sean has pulled out all the stops for the STV Children's Appeal over the last six years and travelled around the country to raise money for Scotland's children. To date, he has walked all four Kiltwalk events, participated in multiple cycling challenges across the Western Isles and Northern Isles, competed in highland games, sporting events, baking contests and climbed Ben Nevis to support the charity’s fight against child poverty.

If you’re an individual or group that would like to help raise funds for children and young people living in poverty in Scotland with the STV Children’s Appeal, please get in touch with Natalie Wright at natalie.wright@stv.tv.